5 Interview Skills of People that GET the Jobs 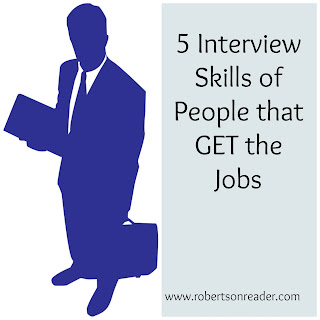 Have you ever wondered why it is that the guy with the exact same education as you and a very similar job history got the job – and you didn’t?  You saw him go into the interview and his appearance was not so different from your own.  So what is it that he had and you didn’t?

Well, it could have been anything but chances are it was one of these 5 things:

1. He knew everything there was to know about the company.

As soon as he got the phone call for the interview he started doing research on the company to learn everything he could.  He probably even did some of that research before he wrote his cover letter and tweaked his resume, but he did more research once he knew he had an interview. And he especially did research on what other people who have the same title as the job he was interviewing for do in that company.

2. He was a good story teller.

Yes, you should be able to tell a good story when you go into an interview because one of the things that interviewers want is specific and concrete examples of things you have done and experiences you have had.  This is not the same thing as having the gift of gab.  When you tell a story (or talk about a specific experience), you need to remember that the interviewer doesn’t have a lot of time so you need to be quick and effective.  You need to be able to talk about your experience in a manner that is interesting (no monotone!) and you need to include all the most important details in the shortest amount of time.

He knew that he should have some good questions prepared to ask when he had the opportunity. His research on the company likely helped him with that.  His question made him appear to be genuinely interested in the company and not just the job.  He also came across as more thoughtful and more intelligent than other people they interviewed.

5. Every response he gave to a question was tailored to the company.

His job research helped him come up with answers to the questions that were relevant to the company that was hiring. His answers were also applied specifically to the job that he’d learned about while doing his research.  By the time the interview was done, the interviewer likely had already decided that he was perfect for the job.