What Are These Circles You Speak of? Google+ Circles of Course!

No, I’m not talking about crop circles or circles in the sand.  I’m talking about Google+ circles.  They are one of the things I like most.

Google+ circles allow you to organize the people you are following so that in the future you can post targeted updates.  You can have several different groups of people that you want to connect with and write updates that are just for that group if you want (and yes, I know that Facebook has the ability to create groups too but it is no where near as easy to do as it is with Google+ circles so most people don’t bother with it on Facebook).

Go to your Google+ and you’ll find Circles in the sidebar menu on the left of the page.  This is what it will look like: 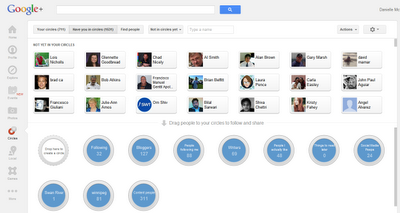 Now what?  You’ll notice that I have a bunch of circles at the bottom as I have already created groups (or circles) of people I follow.  These can be named whatever you like.  No one else can see what your circles are named unless you share your circles with someone.

What kind of circles should you have?  That’s really up to you but you might consider having Real Life Friends, Human Resources People, ___ Professionals (people who are already working in the industry you want to work in), or Networkers. Those are just some examples.

I have two other circles that I have there for a reason.  I have People Who Are Following Me.  These are people that have followed me and I’m not sure yet if I want to follow them back permanently.  They are kind of on probation.  I put them there and then from time to time I go and look to see what kind of information they are sharing.  If they aren’t active or they are sharing things I find inappropriate, I uncircle them.  The other Circle I have is Things to Read Later.  This is where I share links that I’m not sure if I want to share yet but I definitely want to read.  It’s kind of like my own personal bookmarking system.  When I share a link with this circle only, I am the only one that can see it.

So, go ahead and create a few circles.  You can always delete it later if you find that you aren’t using it.

Once you have some circles you can start putting people in them.  You just click on the person you want to put in a circle and drag them inside the circle.  Easy as can be.  You can put people in more than one circle even.

Having people in organized circles does more than just allow you to target your updates.  It also makes it easier to find the kind of information that you are looking for.  You might want to check to see what Human Resources people are posting every day but only want to check in with Networkers once a week.  When you are on the Home page of Google+ you will notice that your circles appear directly to the right of the Home button in the sidebar.  You can click on any of your circles (or click more to see all of them) and see updates ONLY from those people.  That means that you don’t have to waste time scrolling through updates that you aren’t really interested in at the moment!

Play around with the circles and get familiar with them.  I’m sure once you start using them you’ll find that they are pretty easy to use and they can really enhance your experience on Google+!